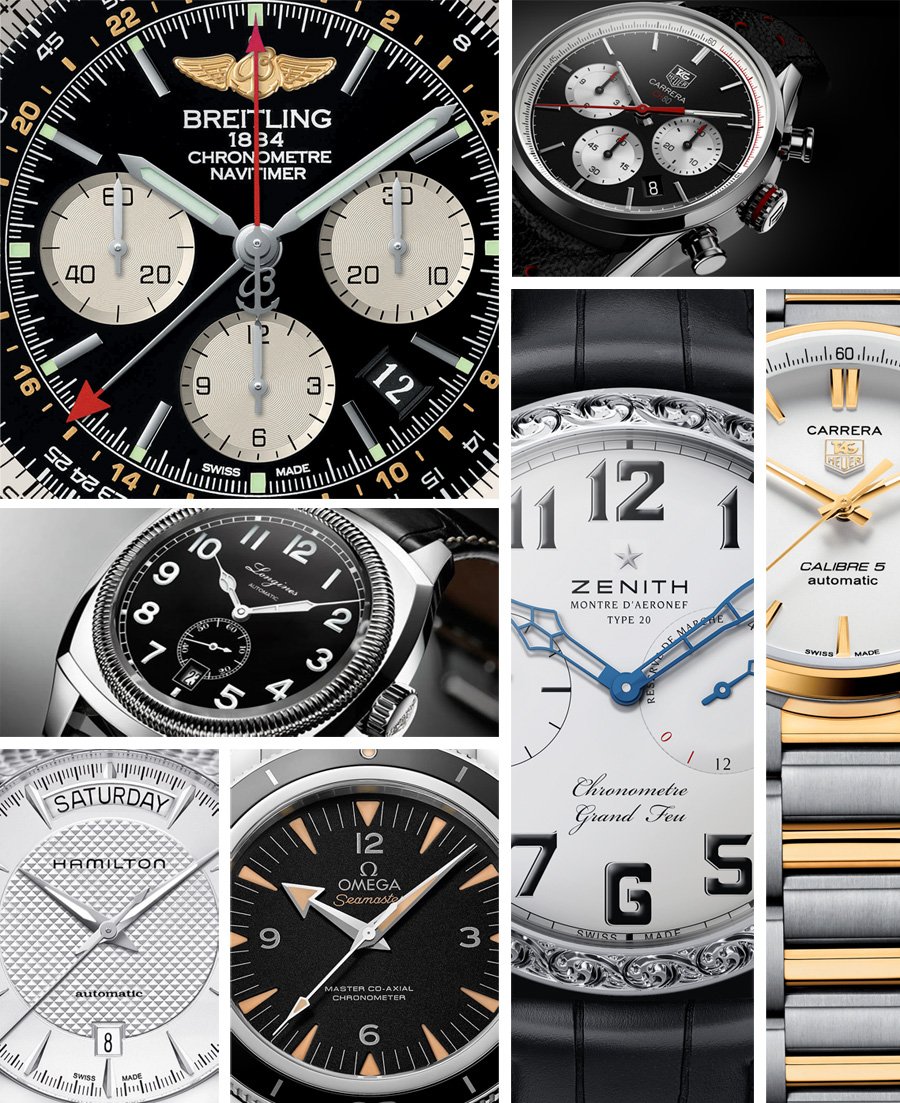 While mining history makes perfect sense for an industry steeped in tradition, more than a few brands offered direct links to vintage models that retained the original’s size and dial, and several served up editions that feature genuine and usually refurbished historic movements.

Zenith, which showed its El Primero Lightweight a few months ago in a BaselWorld preview, adds the new open-dialed Synopsis collection that reinterprets recent history. But the past really revisits Zenith in its limited edition 60mm Pilot Type 20 Grand Feu. This large showpiece is a stunningly engraved model equipped with an historic 1960 hand-wound Zenith 5011K movement, which is shown off well via its clear caseback and side. Only ten will be made.

The new Zenith Synopsis is an evolution of the brand’s 2003 Open concept and this year is being combined with the use of silicon. The dial aperture offers a view into the heart of the El Primero fast-beat movement to show off its silicon lever and the lever wheel.

U.S.-based Bulova is spotlighting retro-themed models, with new Accutrons that recall the company’s inspired designs from the 1950s through the 1970s. The company’s display here is nostalgic, with windows filled to brim with historic advertisements, including several that refer to the very first television ad ever seen in the United States, which Bulova ran during a 1941 Brooklyn Dodgers-Philadelphia Phillies baseball game. The company’s new Telc Collection was inspired, specifically, by the 1960s and 1970s and echoes Bulova’s tuning fork logo. In addition, the company introduced an entirely new line called Bulova Accu Swiss, which recall the brand’s 1960s models and integrate new materials like textured leather straps, steel cases and hand-set diamonds.

At Breitling, the new Navitimer 46mm and the 48mm Navitimer GMT update that firm’s 1952 debut pilot model of the same name, adding the company’s own in-house Manufacture Calibre 01 for the 46mm model and Calibre B04 for the GMT. Of course both models are now presented in contemporary sizes and each shows off its own in-house movement.

Omega revisits numerous historic models this year, updating them with new movements and new materials. Among these vintage-revisits is the Omega 1957 Seamaster 300, which Omega this year has updated as a 41 mm Seamaster 300, available in a wide selection of materials including stainless steel, 950 platinum (in a limited edition of 357 pieces), titanium and Omega’s own Sedna gold. Two-tone options pair titanium or steel with Sedna gold, and one of two movements, Master Co-Axial calibre 8400 or 8401 is featured, depending of the case metal.  Likewise, Omega adds an updated Speedmaster Mark II, but this time offers it with the firm’s co-Axial Calibre 3330, a self-winding movement equipped with an Si14 silicon balance spring and a column-wheel chronograph mechanism.

Longines, which prior to the show presented an updated edition of a single pusher chronograph that originally debuted in 1913, added to its Heritage collection with a new edition of a model seen first in 1935. Sister Swatch Group company Hamilton added new editions of two 1930s Flintridge designs, each with a protective cover as seen on the originals.

TAG Heuer’s new and wide-ranging steel, gold and two-tone 39mm Carrera models are a direct-dial ode to the Heuer Carrera’s 1963 spirit. Seiko’s major launches this year included something very new (the latest GPS Solar Astron) but also a Grand Seiko collection that includes a hi-beat 36,000 GMT Limited Edition and an homage to a 1964 Grand Seiko that was the first to include a date. Glycine, celebrating its 100th birthday this year, adds a tribute to its own Airman model from 1953, the first automatic watch with a double 24-hour display. At 35 mm it’s the same size as the original though it features an up-to-date caliber inside.

We’ll look at more from BaselWorld 2014 next time, including many models with high-tech calibers and contemporary designs.

Check back with iWMagazine.com for more BaselWorld 2014